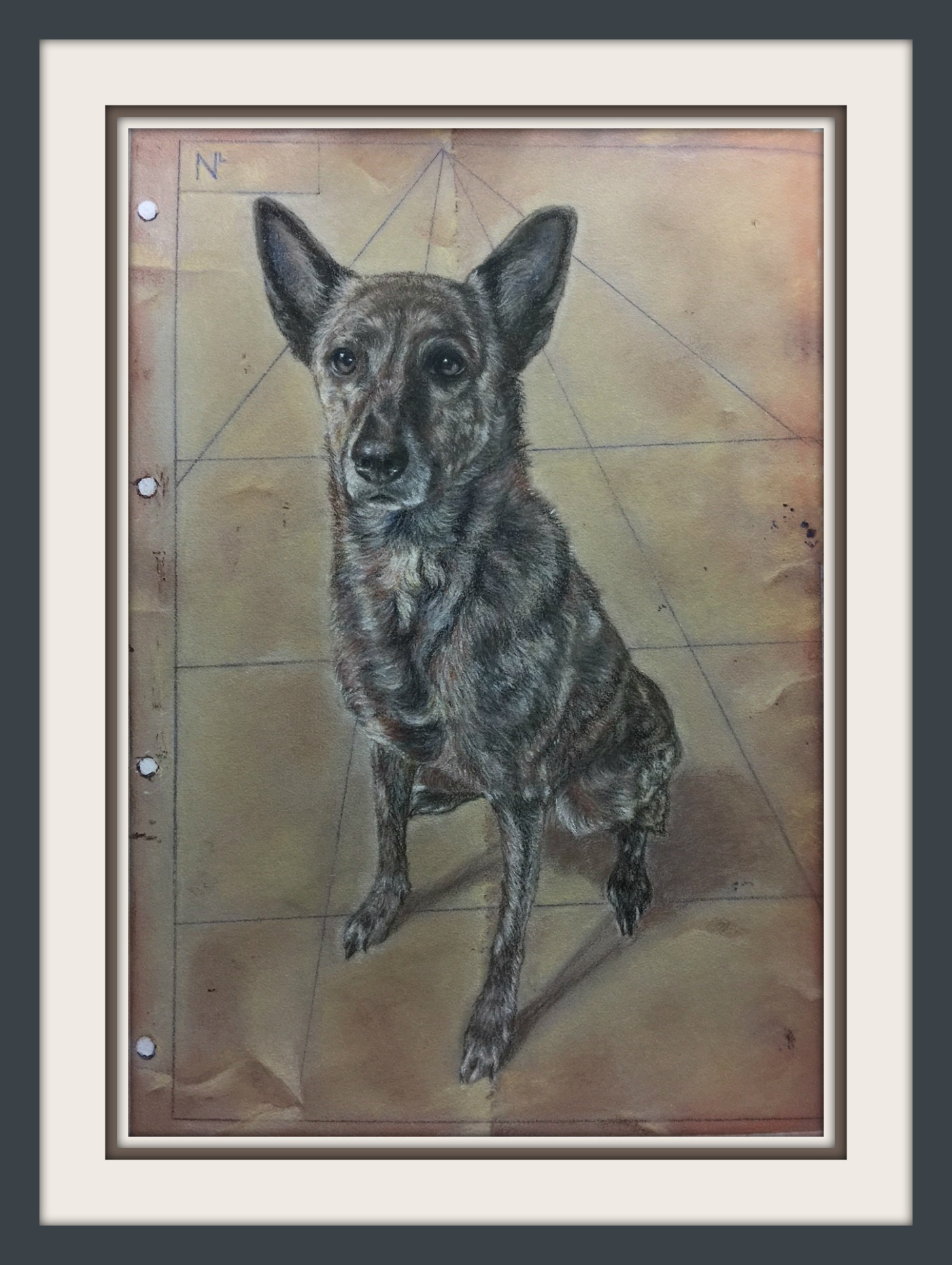 This is Josje, a Dutch Shepherd with beautiful brindle patterning.

Painting character hair or fur such as Josje’s is always a special challenge for the artist as the owner knows every stripe and spot and curve and line of their animal and will be especially critical if the painting misses that attention to detail.

After agonising for what seems like forever, I have finally added a background to Josje.   It was more difficult than I thought it would be.   The photo I was sent, had her sitting on a white tiled floor in the family room of her home – the lines of which provided a vanishing point above her head.   The whole picture was quite sepia in tonality including Josje herself and I wanted to play on that.

I thought about adding some enigmatic windmills in the distance (something Dutch) at the vanishing point line, but a roughed-in sketch on a photocopy looked ‘twee’ and comical.

In the end – thinking old photo edge, film strip edge, old paper edge, something sepia – I remembered the family she lives with have a building connection when I found an image of an old building plan with a ‘blueprint’ depicting some design – not clear and not relevant either except for two letters in the top left hand corner – NL.   Perfect.    That had to be Nederland.   The paper was old and stained and creased – I wondered if it might work.   The vanishing point lines of the tiles would instead become blue print lines.

An artist has to be brave sometimes and this has me out on a limb.   I hope the paper doesn’t detract from the subject Josje as she is so lovely – I can always soften the background or blot it out somehow but I just don’t want it to be ordinary and ho hum.

There always has to be a story.   Always.

4 thoughts on ““Josje” and her Point of View”

I’ve posted my paintings to share with you – some of them are for sale too.

I hope you like them and are inspired to have a portrait painted  of your own special animal or human.

I paint mainly in two media – pastel which is always framed with mats and glass, and acrylic which doesn’t need to be framed if the canvas has a wide edge.   Acrylics can be framed however if preferred.

I also paint in oil for extra special commissions but oil is more expensive and takes longer to dry and be fully ready for shipping so a longer lead time is necessary.